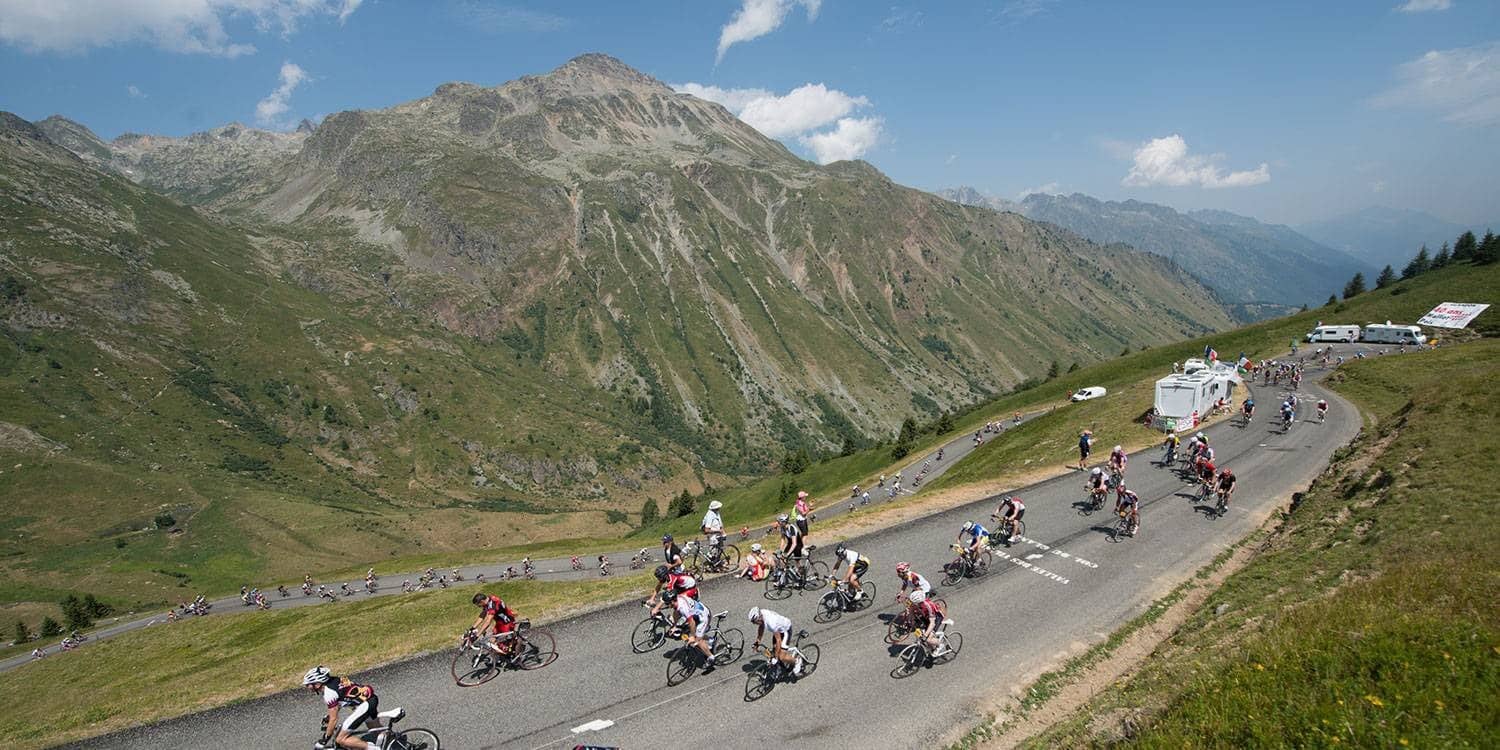 How to stay hydrated on the Etape du Tour

As I’m sure you’re aware given you’ve signed up to ride it, this year L’Etape Du Tour follows the route of Stage 18 of The Tour De France from Briançon to Col D’Izoard. It’s 178km with 2 huge climbs (the Col de Vars, 2,108m and Col D’Izoard, 2,360m) in the closing miles. In other words, the route’s a bit of a b*stard.

If you want to thrive on your way around a ‘Parcours’ of such magnitude then getting your training, nutrition, and hydration properly nailed is going to be incredibly important.

I’m going to assume that you’re already putting in the big training miles to get fit and weighing out your pasta each and every night to get down to racing weight (you are, aren’t you?!). So I’m going to focus on the finer points of hydration (and to a certain extent, fuelling) on the big day itself so that all of the hard work you’re doing now does not come unwound on (or before!) that crucial final climb.

A word on weather

Whilst the weather can be fickle in the mountains, even during the summer months, history suggests that you can probably expect it to be pretty hot in the South of France in mid-July. Even at altitude up on the slopes of the Izoard, the average July daytime temperature is around 16 degrees C (60F) and during hotter days it can top 20 C (68 F).

Whilst this isn’t super hot, if it’s up at 20 C in the mountains, the valley riding could be sweltering and – if that’s the case – hydration will be especially important to your performance.

Because most athletes are somewhat aware that hydration is important for long hot races, there can be a tendency to over-do the water intake in the days leading up to a big event like L’Etape.

I’ve written extensively about this before but in summary, it’s not a wise idea to chug back gallons and gallons of plain water in the final 48 hours before the gun goes off. You’re not a camel and so rather than storing excess water the most likely result is that you’ll spend a lot of time peeing and washing out crucial electrolytes (namely sodium) from your system.

This is potentially a big problem because as you start the event and begin sweating you’ll lose even more electrolytes and you run the risk of diluting your blood sodium levels down by drinking more and more water or weak (dilute) sports drinks. Several hours into a long hot race the end result of this process can be a dangerous condition called hyponatremia.

A long term study on Ironman athletes competing in Frankfurt showed that around 10% of athletes were suffering from at least a mild form of hyponatremia at the finish line of the event. In fact, a few years after the study, one athlete even died from the condition at that race. So it’s certainly something to be aware of that is affecting the health and performance of a reasonable number of endurance athletes in long-distance events.

What to do before L’Etape

In order to start the race well hydrated (without running the risk of diluting your blood salt levels down) it’s a good idea to pre-hydrate with a very strong electrolyte drink such as Precision Hydration 1500, which contains about 3x the sodium of a standard sports drink. The key thing is not to go mad with pre-loading…

On top of your normal day-to-day fluid intake, simply adding in around 500ml of a strong electrolyte drink the night before and then another 500ml on the morning of the race (finishing about 45 minutes before you set off to allow you to absorb the fluid/electrolytes) should be plenty to ‘top off your tanks’ ready to go without just peeing out lots of excess fluid. The extra sodium helps you absorb and retain more fluid, boosting your blood plasma volume which will reduce cardiovascular strain and allow you to maintain your performance for longer. Stronger electrolyte drinks can also help you avoid cramping up later on in the ride too.

Alongside preloading with a strong electrolyte drink, don’t be afraid to add extra salt to your food in the final 24 hours before your race too. This’ll help your body to hold onto a little extra water in the bloodstream and further help prevents a drop in blood sodium levels before the start. There’s more on why sodium is so crucial to your performance here.

Staying hydrated during the ride itself

Once L’Etape gets going, the amount you’ll need to drink will largely be defined by how long you’re out there on the course, how much your stomach and gut can process per hour and your sweat rate (which will in turn be driven by genetics, your work rate, clothing choice and ambient temperature).

All of these variables mean that everyone has different requirements in terms of how much fluid you need and can take on. That means copying what other riders do is definitely not a good idea. Instead, spend some time now to figure out the kind of range of fluid intake that works for you in various scenarios in training to dial in a strategy that’ll benefit you.

On the day of the race itself, it’s a good idea to both listen to your body (i.e. to drink to the dictates of thirst to a degree, not forcing in fluid when you don’t feel you need it) whilst also putting into practice what you’ve learned in training. Bear in mind that it’s a long day and that you can’t afford to drink too little early on without dehydration becoming a potential issue several hours in.

To give a couple of examples on the extreme ends of the spectrum, we work with Professional Team AG2R Mondiale rider, Tour De France stage winner and Yellow Jersey holder Jan Bakalents. Jan has a very high sweat rate and a well ‘trained’ stomach, so in the heat of high-intensity racing on very hot days he can, and often does, consume almost 1.5 liters per hour on the bike.

We’ve also worked with smaller female athletes with much lower sweat rates who can get by on 400ml per hour or less, even in really hot conditions.

With that said, most riders end up needing something in the range of 500ml to 1000ml of water with hypotonic electrolyte drinks (or electrolyte capsules) per hour. So, that’s probably not a bad range within which to start your own experimentation to figure out what will work for you.

In addition to that, we’ve developed a simple, free to use online Cycling Sweat Test to help with this process. It also offers some insight into whether you’re someone who’s likely to perform best on a weaker or stronger electrolyte drink. This varies considerably from athlete to athlete. The average athlete loses about 920 mg of sodium per litre of sweat (interestingly, typical electrolyte drinks only contain 200-550mg/l!), but I lose 1,842mg/l and we regularly test people who lose as little as 400-500mg/l. This is why personalizing your hydration strategy is such a good idea.

A few words on fuelling and what to drink

A big thing to remember when considering how much you’ll need to drink to stay hydrated during a long (potentially hot) event like L’Etape is that the composition of what’s in your drink bottle will make a huge difference to how well it hydrates you and how easily it’s absorbed from your gut into your bloodstream.

I’ve written about the difference between Hypotonic, Isotonic and Hypertonic sports drinks before and the key takes home is that for a long, hot sportive a hypotonic drink (i.e. one with no calories, or containing a very small amount of carbs) is highly likely to outperform anything more calorific. That’s mainly because it’s way less likely to cause you stomach issues and sickness as the race goes on and you satisfy your high requirement for fluids and electrolytes.

My main piece of advice is to look at what you’re putting in your bottles as fluids for hydration rather than a source of significant calories/fuelling. Aim to get most of your calories from solid foods, gels, bars, fruits and whatever else you’re carrying in your pockets or can pick up from the well-stocked aid stations on the Etape route. Again, I’ve covered this topic in more detail elsewhere.

By taking this approach to fuelling and hydration you maximize your chances of keeping optimally hydrated whilst keeping your stomach happy and getting in enough energy to see you right to the end of the course, even in the most extreme conditions.

Cramping can be an issue in very long, hot races – especially for people who’re not brilliantly acclimatised to riding in the heat. For a full rundown of the latest thinking on the complicated topic of muscle cramps, read this blog.

In a nutshell, if you get your electrolyte balance right by following the kind of hydration and fuelling strategy outlined above, you’re far less likely to suffer the muscle cramps that are so often the cause of serious meltdowns during tough rides like L’Etape Du Tour.

I’d recommend taking the free online Cycling Sweat Test as a starting point for personalising your hydration strategy before July 16th. And, if you want to test some stronger electrolyte drinks, use the code SPORTIVEB15 to get 15% off your first order at Precision Hydration.

Enjoy the ride of a lifetime…

Andy Blow has a degree in Sport and Exercise Science and was once the Team Sports Scientist for Benetton and Renault F1 teams. He founded Precision Hydration to help athletes solve their hydration issues and work with elite athletes such as Tour De France Yellow Jersey holder Jan Bakelants.