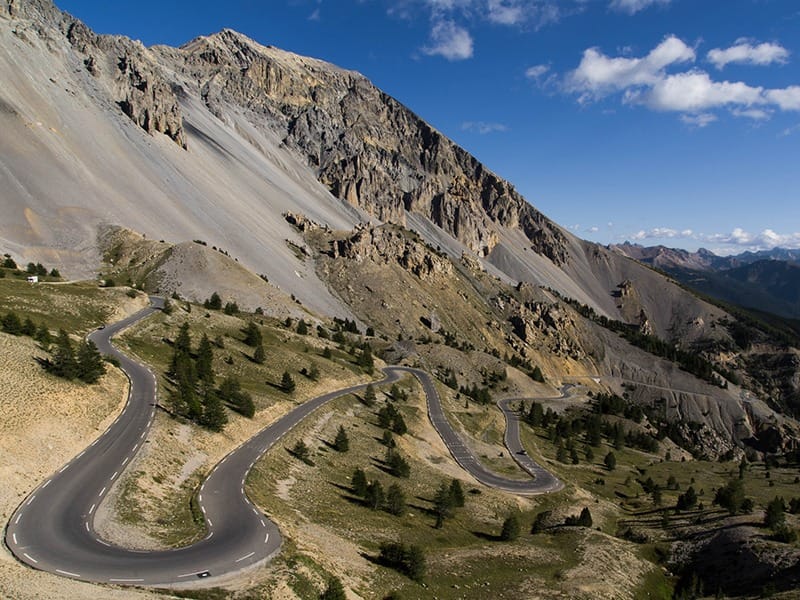 Possibly our all time favourite climb on the planet, the Izoard is a legendary climb from the Tour de France with spectacular and varied landscape including the stunning Casse Déserte. The climb starts in the old town of Briancon and is often ridden on the same route as the Galibier or coming from Alpe d’Huez. To the south is the Col de Vars and then the Col de la Bonette.

When to Climb the Col d’Izoard

The Izoard is open from the end of May / early June to mid / late October (or later if the winter is mild).  With a summit at 2,363 there can be snow at the summit well into June and there can be big temperature changes from Briancon to the top of the climb. The tour comes to the Izoard every two to three years where some of the most famous battles in cycling history have taken place.

Starting in Briancon, the climb is close to 20km so you will be climbing for 1.5 to 2 hours. This is a climb in two parts, the first 10km is relatively easy averaging 4.3% and the second half at a much steeper 8%.

The climb is well signposted out of Briancon as you follow the D902. There is very little traffic on this road as most of the road traffic takes the main roads south or east. The very start of the climb is at 6% and then quickly the road flattens out to 2 to 5% as you follow the river through a steep valley with high mountains in the distance. This is time to spin easily and get ready mentally for the harder sections to come.

After 10km you reach the small town of Cervieres and take a sweeping right hand turn, this is the point the steepnest and landscape changes. Almost immediately the gradient ramps up to 7 to 8% and by now the road traffic is very low apart from cyclists from all over the world. 4km after Cervieres, the climb becomes spectacular with 20 corners packed into the final 5km. In the last 2km, you get above the tree line and enjoy amazing views of the road below you. The gradients slightly ease up near the top at around 6-7% but you can start to feel the coolness in the air as you get out of the trees. The final left bend gives you one last look at the road you have come up and then you have reached the top with the famous summit marker. There is a small car park here and this is a good place to stop for a drink and some food before layering up for the descent. The first 5km of the descent towards Arvieux is even more spectacular as the final part of the climb. It is easy to ride past the Coppi Bobet monument and the road is very narrow so if you want to take pictures of the Casse Deserte pull in carefully to one of the lookout points.

From either direction this is just a magnificent climb with everything you could want: spectacular views, tons of Tour de France history and very little traffic. Plan your trip to the Izoard NOW!!