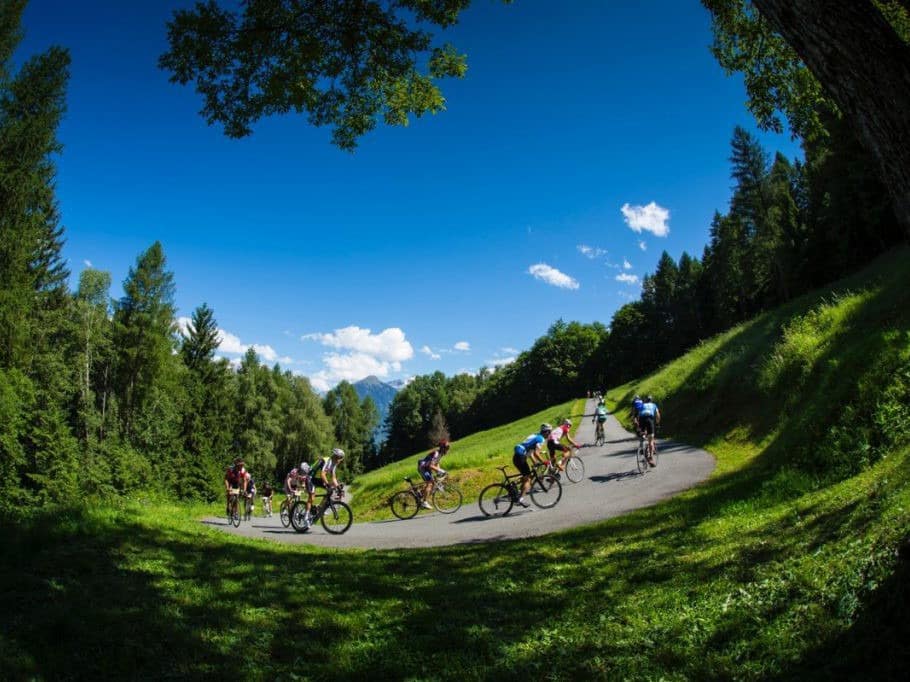 Perhaps the hardest climb in professional cycling, the Mortirolo is often used in the Giro and is normally a decisive climb. This is the most famous of the numerous ways to the summit and a possibly the hardest 1-1.5 hours of your cycling life!

When to Ride the Mortirolo

The Mortirolo is set in the Italian Alps close to the Stelvio & Gavia. The Swiss border is just 12km away and the Bernina Pass starts close to the border. By comparison to the famous climbs that surround it, the summit of the Mortirolo is much lower at 1852m (the others are over 2,500m). This is often ridden in a loop with the Passo Gavia starting and finishing in Bormio or a loop taking in the Teglio, Mortirolo & back to Bormio. The road is rarely used and is closed for the winter, typically ready to ride from late May to late Sept. It features in the Stelvio Santini (a slightly different way up) in early June and often in the Giro in May.

If you are coming from Bormio you have a lovely 30km ride along a quiet road mostly downhill with a couple of kicks on the way. As you get into the town of Mazzo, the climb begins. The very start is unglamorous as you ride out of this small town but after a short, easy stretch the real effort begins and doens’t stop for 10km. A left turn at the end of town is the start of the steep stuff and within 100m you have left the valley floor and ridden into the woods. The gradients now are consistently over 10% and the road is very narrow. A few people live in remote farms & houses up the climb so there is very little traffic. This is obviously a great feature to the climb as you are often completely on your own, but on the downside the road’s narrowness makes passing hard for vehicles and the road surface is not as good as busier climbs (though the regular presence of the Giro means the surface is always a good standard).

The steepest section of the climb is 18% and found at around the 5km mark. The feature of the bottom 2/3rds of the climb is steep corners followed by long, steep straights. There are no flatter sections so it can be very hard to reduce heart rate or recover. There are around 20 hairpins in the first 7.5km before you get to the Pantani monument.

Pantani Monument to the Summit

One of Italy’s most beloved cyclist, Marco Pantani, had many career highlights and has numerous monuments but this one on the Mortirolo, where he won a stage in 1994, is one of the most famous. On a left turn hairpin 7.5km into the climb you will see a tall slate wall with a statue of Pantani looking over his shoulders. Depending when you go there you will also see pictures of him and banners paying tribute to the man. This is a good place for a bit of food and a drink before the final kick up to the top.

The next km is tough at around 12km before you meet the climb coming up from Grosio. Once the two roads meet (on another steep hairpin) the gradient and the landscape changes. Most of the climb so far has been in the trees with broken views on a narrow road and always a steep gradient. After the joining of the Grosio route, the road widens and the views widen as you ride past Alpine meadows with the sound of cowbells supporting you up. The last 3.5km average 8.5% and is finally a chance to ride at a good cadence. As you get close to the top you get above the treeline and the views of the Alps around you comes into view.

The final sprint is around 7.5%, the easiest section of the climb. At the summit, there is a place to stop and recover before getting your picture taken with the summit marker. Despite this climb being one of the most famous in Italy, you see very few other riders but at the summit there are normally a number of people recovering after a massive effort and it is common to see amateur riders from all around the world here. Overall, this is not the most beautiful climb until the last section but most of our riders that do all of the major climbs in this area say that the Mortirolo is their favourite and is an absolute must ride.