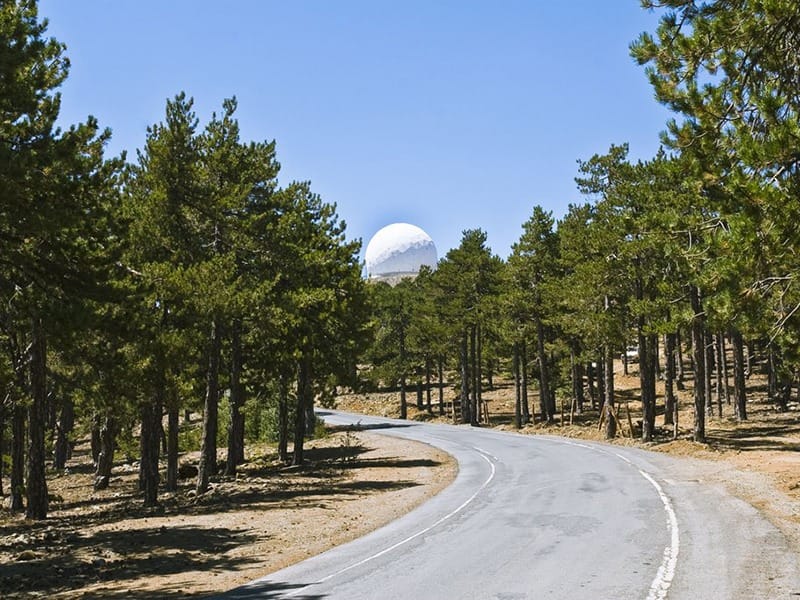 A unique climb in the spring training paradise of Cyprus. Though the segment starts in Kato Platres, the route to get up here starts on the coast with a almost 2,000m of vertical ascent in one climb! There can be very few cycling routes that start on the beach and finish at a ski resort.

Boasting the most sunshine in Europe, rolling hills, high mountains and exceptional road surfaces with almost no traffic, Cyprus is rapidly becoming a major spring training destination. The majority of riders stay in Paphos and alternate easier days with rides in the Troodos mountains & Paphos forest.

When to Ride My Olympus

The main cycling season in Cyprus is mid Feb to early May, and then autumn is a great time to visit in October & November. You can definitely come in mid winter when it is still sunny but there is more rain, the summer is busy on the roads & unbearably hot. Coming in Spring means there will likely be snow on the summit of Olympus and the valleys will be green but you might get a half day of rain. In the autumn, it is much drier but the trade off is the scenery becomes much more arid.

The segment starts in the mountain town of Kato Platres but by this point you have already climbed from sea level to 915m, so no description of this is complete without mentioning this first. Assuming a start in Paphos, the first 15km is pancake flat on the airport road and a good warm up. There are three main ways up to Kato Platres but the most direct is the “Wind Farm” road turning off the main road by the village of Kouklia. Over the next 40km, the climb goes up from sea level to 915m. A third of the climbing is done in the first 6km with a gradient of just over 5%. The road surface (generally in Cyprus but definitely on this section) is absolutely amazing and outside of the summer peak, there is very little traffic on these smaller roads. All of the routes up to the Troodos mountains are rolling with flat sections and downhills. This way up has 8 different small climbs followed by easier sections but the cumulative affect of almost 1,500m of climbing before the segment starts makes Mt Olympus a tough day.

At almost 1,000m, the towns now start to have more of a mountain feel. The gradients increase from Mandria and after the 3 to 6% gradients on the way up, the road now hits 7% and stays there for most of the way. After 3km, you ride through the bigger town of Platres. There are restaurants and cafes here if you need a quick stop.

Out of town there are a couple of hairpins and this is one of the steepest parts of the climb, with some short parts over 10%. The trees here tower over the road giving shade as the landscape & temperatures starts to change as we get over 1,200m. The next 8km between Platres and the main mountain town of Troodos is quite tough. The main road from Limassol joins here so there can be more road traffic than the first part of the climb. The gradients rarely ease up and this is a time to dig in.

The town of Troodos is at 1700m and this is a proper mountain town. This could be a time to put on a jacket as you will start to feel the coldness in the air from this point. There are a couple of cafes and a hotel in town if you need a stop. A left turn out of town to Olympus is well sign posted.

By now the views become more vast and after 2km there is a left turn to take you right up to the summit. The snow line can be anywhere from a few km below Troodos to near this point but likely now you will see snow by the side of the road. Along with the hairpins out of Platres, this is another of the hardest parts of the climb with plenty of 10% plus sections along with flatter parts making it quite hard to find a rhythm. About 2km after the left turn you can see skiers on your left and a car park close to the bottom of the lifts. Keep going on the road past this and the road finishes about 700m later going over a mini roundabout and up to the military base at the top. By this point it can be very cold (below 0 degrees often even if it is over 20 degrees in Paphos) so ensure you have some warm weather gear as the descent is not fun at all if you are cold.

Overall, this is a very long and unique climb from sea level to ski resort. The views of rolling hills in the bottom part is lovely and the variety as you get higher keeps the climb interesting. It is a slight anti-climax not having a summit sign at the top but this is a reflection of Cyprus being a less known cycling destination. The long descent back down to the coast is thrilling and Paphos is a great base to enjoy a celebratory beer overlooking the Med after an epic ride.