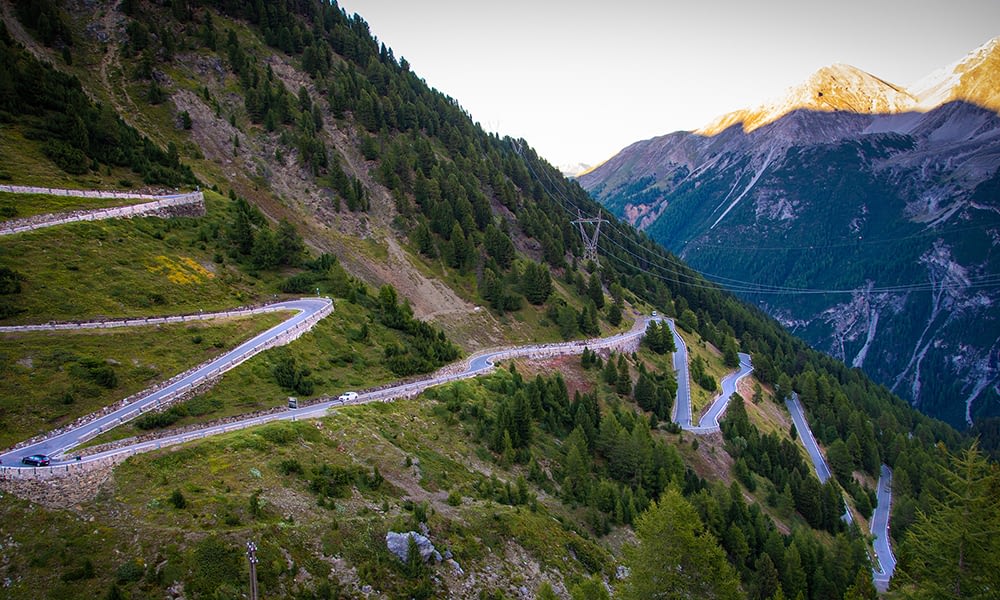 The most pictured climb on the planet, the ultimate bucket list ride: 48 hairpins in 24km from Prato to the Passo Stelvio at 2,758m. This is the second highest paved mountain pass in the Alps (after the Iseran) and a classic climb of the Giro d’Italia, ridden most recently (on the descent) in 2017.

When to Ride the Passo Stelvio from Prato

The pass is closed over winter and typically opens at the end of May unless the Giro is coming through. In the summer holiday peak (mid July to mid August), the temperatures can be hot even at the summit but the main distraction is the amount of traffic. The best time to ride the Stelvio is early June to early July and then late August to mid September. Depending on the weather, it is possible to ride the Stelvio on a good day in late September & October.

Riding the Stelvio from Prato

Typically this climb is ridden on a one way raid (starting somewhere like Merano) and finishing in Bormio or on a circular loop from Bormio taking in both sides of the climb. Either way, it is likely to be the last climb of the day and you will be hitting it with miles in the legs. Typically this is then done in the afternoon and the temperature while climbing the top section can be less of an issue than climbing the other side from Bormio earlier in the day. The start of the climb is in the small town of Prato, if you are coming from the Swiss side there is a right turn on the SS38 and the Stelvio is well sign posted.

This is a climb in two sections with most of the hairpins, beauty and difficulty in the second half. The first 10km is in a narrow valley with with gradients fairly steady between 5 & 7%. You hit the first two hairpins by an open sided tunnel but the climb proper doesn’t really start until you hit the small village of Trafoi by hairpin 46.

The second half of the Stelvio climb from Prato is tough but one of the best rides you will ever have so try not to spend it chewing your stem & look up! The scenery changes from a narrow valley to big mountain views & snow capped peaks.

After riding quickly passed the few hotels in Trafoi, it’s non stop hairpins. 46 to 43 give you a steady introduction before seven tight turns. At this stage you are still in the tree line and the evergreens are tall keeping you in shade. By turn 22, you can see the top which by then is around 7km away and the treeline is at around this point, leaving the top section un-sheltered. At turn 22 there is a hotel with a cafe if you need water / food. The remainder of the climb can be quite narrow so this is a good place to stop if you want a breather or some time to get your heart rate down and take in a bar or drink.

As with most climbs for which hairpins are a key feature, the bends are flatter than the straight sections so you can take these wide and increase your cadence ready for the next steeper part. The gradients are consistently over 8% in the top half of this climb but rarely go above 9%. The last few kms are the famous part that you will have seen many times before. The bends are tight here and cars often need to go wide to make it around so be careful. After the last hairpin, the gradients touch 10% for the last 5oom until you start to see parked cars on the side of the road and then stalls and other riders resting at the top. Keep going until you see the Stelvio sign, grab a hot dog or coffee at the top and put on your wind proof jacket for a thrilling descent in either way.