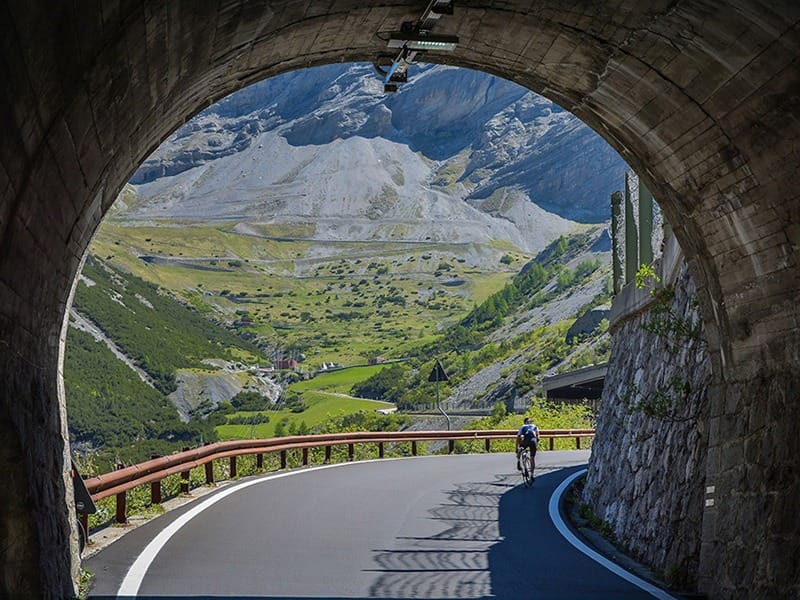 Not the most famous side of the Stelvio but for our money the best climb, the 21km ride from Bormio to the summit at 2,758m is full of variety in both landscape and gradient making this one of the world’s great climbs.

The start town of Bormio is stunning. Set at the end of a valley road, Bormio is at the base of the Stelvio, Gavia & Foscagno passes making this an incredible base for road cycling. It is also a big ski town & home to a lot of international ski teams. In the summer you can still ski on the glacier. The town is ideally set up for cyclists with bike friendly hotels & lots of cafes and restaurants to get pasta and other pre ride fuel. The top of the climb is the border between Lombardia & Trentino and Bormio is the home of Pizzoccheri, a buckwheat pasta which is extremely popular.

When to Ride the Stelvio

Typically this is ridden as the first climb of the day. The elevation change in the climb is massive so expect very different conditions at the bottom and top of the climb. The Stelvio typically opens in late May depending on the amount of snow over Winter. The popular Stelvio Santini sportive in early June is often one of the first chances to ride it unless the Stelvio has been featured in the Giro in May. It can be ridden until around the end of September (though if the weather is good you can ride in Oct). We avoid trips to the region in mid July to mid August as the weather can be hot but more importantly the roads are too busy with tourists in cars & motorbikes.

Starting out of Bormio, the route follows the SS38 and it is well signposted. You get a flavour for the many hairpins to come right at the start as you quickly climb out of town. The road then straightens out with pleasant views below of the small valley towns heading towards Livigno. At around 4km you go through the first of 7 small tunnels and then take a right turn into the main tunnel section.

This next section is approx 4km to 10km where the landscape changes dramatically after a right turn. The mountains to either side of you are more dramatic and you start to hit some steeper hairpins. The hairpins can vary from 6 to 10% and are fairly short (certainly compared to somewhere like Alpe d’Huez). In this section the hairpins are tight & any vehicles might take a while to overtake you. The famous tunnels come in quick succession, 6 in 3km. These are mostly short and open on one side so the light is not a major issue though we would recommend having at least a back light & be very careful on this section on the descent.. The gradients tend to be not steep (3 to 7%) in these and this is one of the gentler parts of the climb. The second tunnel in this section (and third overall) has traffic lights so you might have to stop for a while. The last five tunnels are back to back with short sections out of the tunnels and then straight back in. On a hot day this can be nice relief from the sun and heat.

Out of the last tunnel is one of the great sighs on this climb (see the image on the top of this page). Ahead of you is a wall of hairpins and dramatic mountains in all directions. On the left of the hairpins is a waterfall as you climb you can start to see the road you have come up with massive views back down the valley (see image below). This is the heart of the climb and what you have come for – 13 hairpins in just over 3km. The gradients here are quite steep, 7 to 10% but the corners are flatter so you can increase your cadence for each short, steep section. The top of this sector is a great place to stop, have a drink and take in the amazing views.

To the Swiss Turnoff

The next 5km is probably the easiest part of the climb but there are a couple of sharp kickers just to keep you interested. The landscape changes again to quite lush Alpine meadows and this part is a saddle connecting the first section of the climb with the hairpins nearer the top. This is a chance to get your heart rate under control, take on some food and fluids before the last section. The temperature can start to cool as you go over 2,000m. The gradient starts to kick up just before some hairpins which takes you to a fork, to the right is the Stelvio and to the left the Umbrail pass and the Swiss border. There is a derelict building here and this is another good place to stop, take in the views and get ready for one last push.

The last 3km is arguably the hardest. We are now at around 2,500m and you are likely to be see snow by the side of the road. The air is thinner and cooler here, often this is the point to put on an extra layer. The summit is very visible for the last 3km but the gradient get’s steep – over 10% for a lot of it. The hairpins are not as tight as the road makes it’s way slowly up to the summit. After the last corner you pass a carpark on your right, keep going and you will see the Passo Stelvio sign and the road change from up to down! At the top are a few shops selling mile markers, caps etc, a couple of cafes and vendors selling hot dogs. It is normally chilly here but make sure you get a picture of you with the Cima Coppi sign and go 50m down the descent to see the stunning last few kms of the other way up the Stelvio from Prato. Then, it’s time to layer up and enjoy a descent in any direction. This climb can be done as a simple out and back or our preference is to descent into Switzerland, lunch in Prato and then take on the other side of the Stelvio in the afternoon before early evening beers back in Bormio.

Tour of the Dolomites Jun to Sep Prices From: £1299