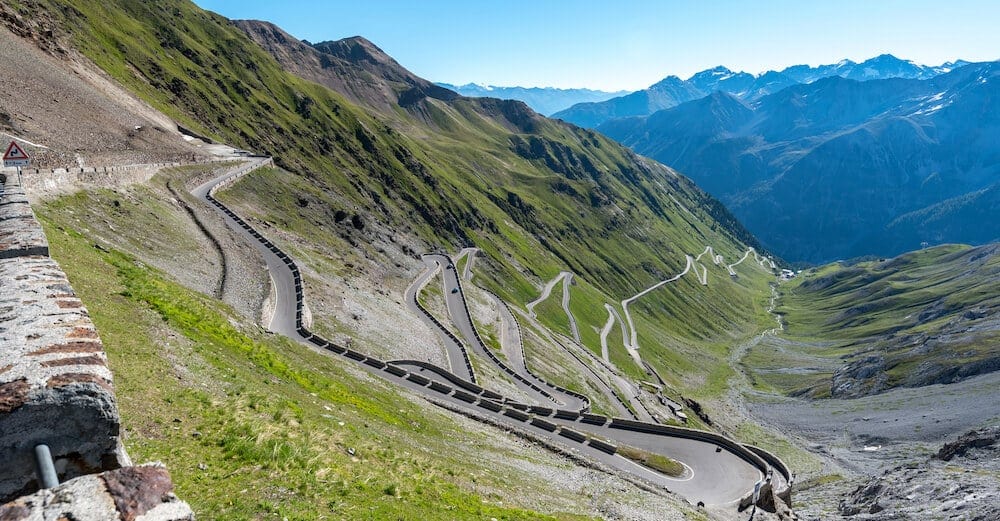 We are counting down the most legendary climbs, the ones that all riders need to tackle once in their lives. Check out the others in the list; number 5 – Col du Tourmalet, number 4 – Alpe d’Huez, number 3 – Passo del Ghisallo & number 2 – Mont Ventoux

What Makes the Stelvio so Special?

Our favourite climb in a world full of great climbs. The Stelvio is a fascinating, beautiful and historic mountain with three different routes to the top, each with their own distinct character. The summit is a very high 2,758m – the second highest mountain pass in Europe, and has snow at the top most of the year adding to the feeling that you have ridden something completely epic. There are a total of 75 hairpins on the road, 27 on the Bormio side and 48 on the Prato side, and these are what really makes the climb so famous.
The Stelvio is the most famous climb in Italy and is often used in the Giro d’Italia. The first ascent was in 1953 and was won by Fausto Coppi and since 1965 the first rider over the highest part of the Giro has been awarded the Cima Coppi. Going above 2,700m in May has often led to snowy conditions with riders climbing on a thin strip of tarmac sandwiched by huge snow blocks, but such is the draw of the Stelvio that the organisers look to include it as often as possible. The pass is closed for winter and opens depending on weather conditions, typically mid May and then closes at the end of October or early November.  We are based in Bormio for the whole season. The best times of year are June and early July then from mid August until the end of September. Early August is the peak of the Italian summer holiday so the mountain is busy and not so much fun on a bike.   Join us for the epic Stelvio Weekender trip for your chance to ride those 48 hairpins

The Stelvio is in the Italian Alps, close to the Swiss border. There are decent roads from major hubs in Northern Italy but it is a fair drive (3 hours) from any airport. The Dolomites start around 70km to the East of the Stelvio and look very different to this part of the Alps.

Where to Stay – Bormio is easily the best place to stay to climb the Stelvio, It is a lovely mountain town with an old square and thermal baths with great access to other climbs in the area.

Nearest Airport – Milan Linate (LIN) is a 3 hour drive. ** In 2019 Linate is closed from July 26th for 3 months so Milan Malpensa will be the best option**

There are three ways up the Stelvio. We will start with the most iconic.

From Prato: The famous image of the Stelvio with it’s 48 hairpins are coming up from the Prato side. This is harder to get to from Bormio as it requires coming up from the other side first (there are no other viable ways to get to Prato from Bormio) so you are likely to get to the start of the climb with a couple of thousand metres of climbing in your legs. The bottom section is in pretty Alpine forest with friendly gradients of around 5%. As mentioned, traffic can be fairly busy particularly with Italians trying to overtake and trucks before hitting the hairpins. Out of the Forest, the road hugs the valley and fairly soon you start to hit the hairpins. You can see the summit from a long way out and you are then in the heart of the climb – the many, many hairpins to the top. For those familiar with Alpe d’Huez, the Stelvio is similar to the very bottom section with steady 8-9% straights, and flatter banked corners. The straights are shorter in length than the famous French climbs, often just a few hundred metres at a time and the corners are often tight. This section is pretty relentless and repetitive. If you time the ascent wrong you can be followed closely by cars looking to overtake. Eventually, you reach the final hairpin and a straight run to the top and you get the glorious view of the climb you have just completed.

From Bormi0: This side doesnt have the postcard view but is arguably more interesting with several distinct sections. Starting out in Bormio, you hit a couple of practice hairpins and then head into the mountains via a couple of short tunnels. You hit the valley quickly and can see outstretched ahead of you a large part of the climb. The first challenge is some short, sharp hairpins (8-9%) which take you into the tunnel section. These are fairly short and lights are not essential. Through here you see the famous section of the Bormio ascent and start on the major hairpin section, accompanied by a waterfall and building used in the war. There is normally animals grazing here so you should have the lovely sound of cowbells accompanying you. This section is not super steep and has great views, definitely one of the most enjoyable parts of the climb. From here, you hit a long saddle which feels very remote. The gradients here are less steep and is similar to the top of the Croix de Fer in the Alps. From the end of the saddle, you can turn left to Switzerland and the Umbrail Pass or right to the summit of the Stelvio. Continuing to the summit takes you to the steepest part of the climb, a short hairpin section to the summit. Though the gradients touch 10%, the top is in sight and this is a time to get out of the saddle and power to the finish.

Passo Umbrail: This is a much lesser ridden side, mostly because you would be choosing this way up rather than the classic side from Prato. This was used in the 2017 Giro d’Italia where eventual winner Tom Dumoulin was “caught short”. This road was resurfaced in 2015 and is very smooth. From the start, you hit the first hairpin section with steep gradients straight away. The bottom section is in the forest, and then the views open up as you go above the tree line and you can see the hairpins in front of you which are as impressive as the Italian side. The top section is stunning with curvy hairpins taking you to the top near the Swiss border and a chance to look back at some amazing views. There is a short 3km ride to join the Stelvio just a few km from the summit. The Umbrail is normally a descent (and a very fun one) for people riding both sides of the Stelvio. The top of the climb is at 2,500m so if you are doing this in the morning, make sure you pack cold weather kit.

Other Climbs in the Area

You are spoiled for choice out of Bormio. For shorter climbs, try:

For longer and harder climbs, the Passo Gavia is an absolute classic. It is a long climb at 26km averaging 5% with steeper sections near the top. This is another high summit at over 2,600m. Once you have gone up and over the Gavia, the “easiest” way home is over the very steep Passo Mortirolo. There are numerous ways up here (all steep) with the hardest being 12km at 11%. Not far away in Switzerland is the Bernina Pass, another monster going over 2,300m.

Read more about the other climbs in the Stelvio region here

The Sportive Breaks Stelvio weekender is 4 days of epic riding taking in all the highlights in the area and riding two sides of the Stelvio. Places are available throughout the Stelvio cycling season from £549.  Early June sees the Stelvio Santini sportive with 3 route options, all finishing at the top of the Stelvio from the Bormio side. 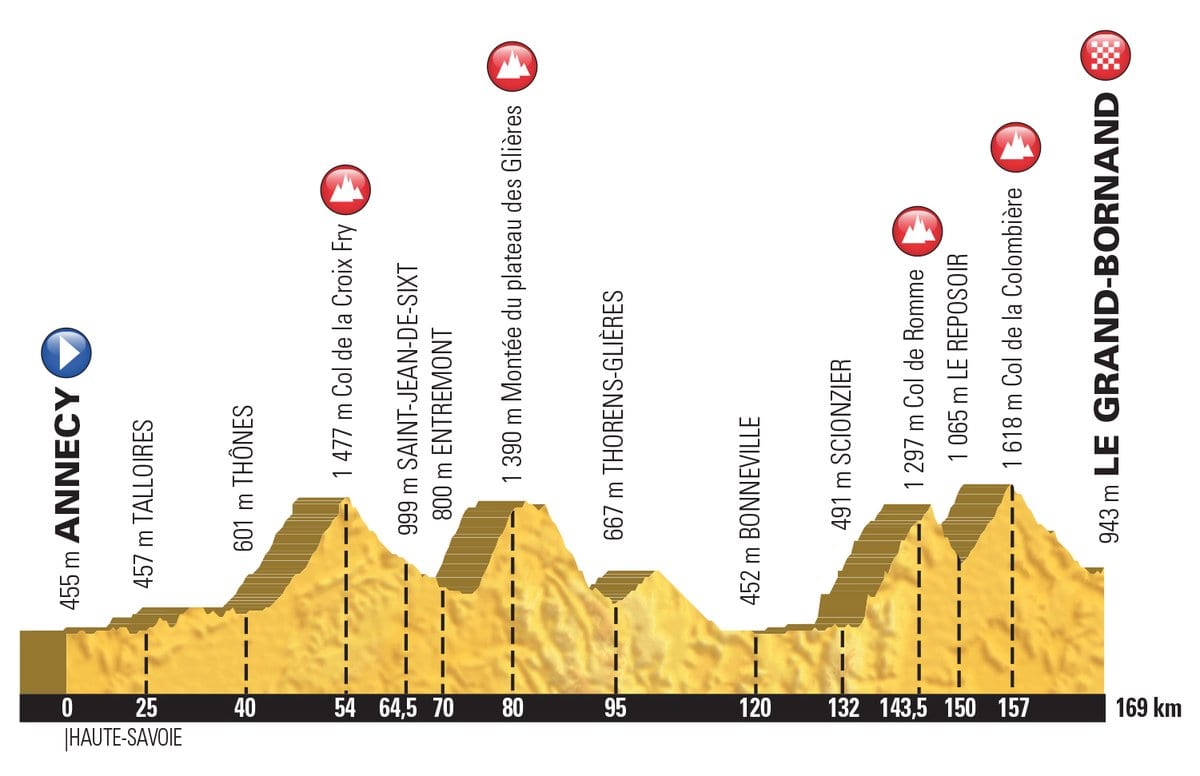