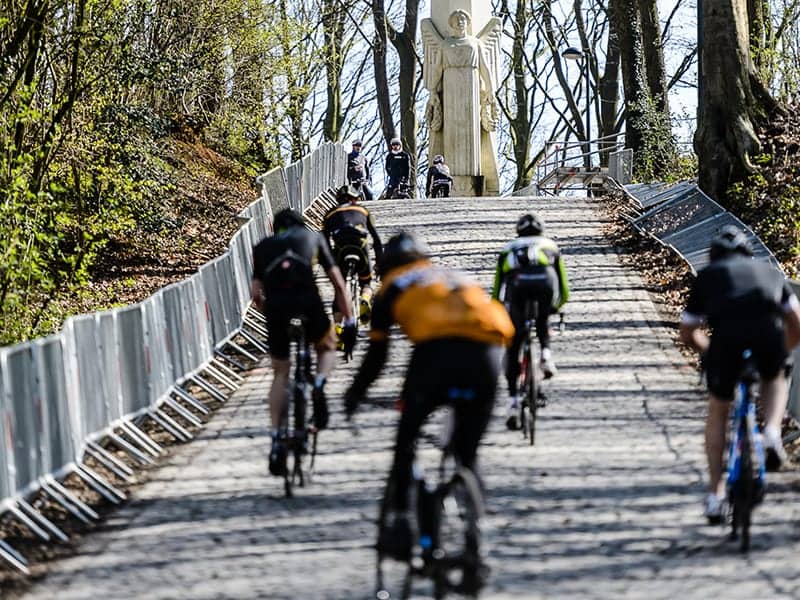 Sportive Breaks’ own John Deering spent the 2018 classics season embedded with Peter Sagan and team Bora Hansgrohe. This is the first in his series of articles as the Spring classics return to northern Europe this Sunday with Gent Wevelgem.

Welcome to the 2019 Gent Wevelgem Sportive!

If you’re wondering about the spelling, or what to look for on the road signs:

In keeping with the more garlanded Paris – Roubaix, this event craftily only keeps the finishing town of the title, starting in the unheralded Flemish town of Deinze. That makes the start 18 kilometres from Gent, which isn’t bad, but you wouldn’t want to walk it.

On the other hand, Compiegne, the start for Roubaix is a full 80 klicks from Paris, meaning… well, you wouldn’t want to start from Paris, so G-W wins on authenticity. Technically, Deinze is a city, but with a population and natural beauty of similar level to Canvey Island, it’s fair to say that it can be dismissed as a Belgian thang.

Wilko Johnson, the handsome and charismatic guitarist of Dr. Feelgood, the 1970s Canveyite R&B heroes, coincidentally resembles many members of the local Deinze population, some of them even men. Sadly, it is in his more recent incarnation as the executioner Ser Ilyn Payne of Game o’ Thrones that this undeniable likeness really has its roots.

And here is the first great thing (there are many) about G-W: The sportive sensibly starts and finishes in Wevelgem, a huge relief for all practical-minded cyclists: we can all come back to the same spot and we are less likely to be beheaded on royal orders.

The race is high on character and is splattered with a great deal more picture moments than you might think. Wrongly characterized as a little Tour of Flanders, this race has no more in common than its muscle-bound neighbour than, say, Hampshire has with Somerset. So if anybody asks you why the Kemmelberg isn’t in the Tour of Flanders, tell them it’s for the same reason the London Marathon doesn’t go up Box Hill. It’s miles away.

The ridge that the Kemmelberg scales peaks out at 156 metres, which certainly makes it more like a West Country hill than, say the Koppenberg, which is more like Surrey or Essex as 77 metres above sea level, so it’s impressive. The recent addition of some of the many gravel roads over here in the Flemish West Country is another great innovation that adds to the individuality of such a fantastic sportive. The 215 route is as good a ride as you can get if you’re not looking for mountains, and it ranks among one of the office’s absolute favourite days out.

Beyond that, the poignancy of riding through this area is inescapable. Immaculately tended cemeteries of all sizes carrying the neat white gravestones that mark the falling place of countless men who didn’t return from World War I. They called it the Great War then, seeing as how it could never happen again.

The Kemmelberg itself, a smoothly cobbled pretty drag up to an auberge in quiet woods, was the scene of some pivotal fighting when the massive German offensive of spring 1918 captured the significant high ground from the French amongst catastrophic loss of life on all sides. The British reversal of the position in the autumn of the same year directly triggered the sudden German collapse and the Armistice in Amiens shortly after.

You won’t need reminding when you’re there, no more so than when you pass through the Menin Gate at Ypres, inscribed with the name of every man whose resting place remains unknown. There’s a fair few of them. The war is all around you and unremittingly moving. It is a tradition to raise your finish line beer at Gent – Wevelgem to those who went before.