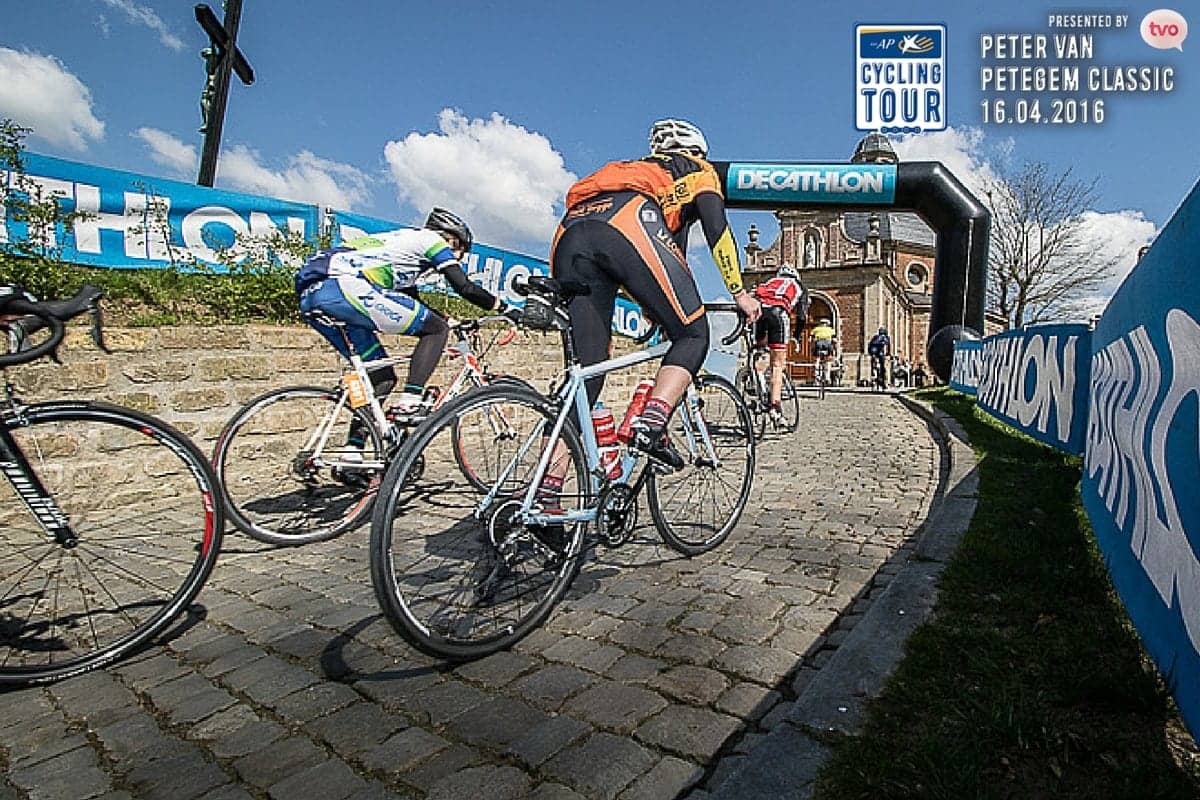 The two weeks from Gent Wevelgem to Paris Roubaix are packed with some of the best pro races and sportives of the year. Flanders buzzes with excitement and the sport is rarely off the front pages. Thousands of amateur riders from the UK & Ireland jump across the Channel to experience one or more of these great sportives, all within an hour and half of Calais. Here are our superlatives from the best two weeks in the cycling calendar:

Best Climb in a Sportive

Prior to the recent course change, the Muur was THE climb in the Tour of Flanders, a narrow, steep 1km climb hitting it’s steepest section at 20% on a corner packed with fans even on the day of the sportive. After a short second to catch your breathe, the climb kicks on again to finish by the chapel that looks down over the town. The locals were so apalled by the absence of this climb in their race that it reappeared in 2017 and back in the sportive for people riding the long ride. The natural amphitheatre, the history, the crowds and the difficulty makes this our number one climb of the cobbled classics. The week before, at Gent Wevelgem the Kemmelberg is a cracking climb steeped in history from the First World War. The climb can be tackled from numerous sides, we take on the straightest with a nasty steep ramp taking you to the monument at the top.

Suitable for the night before or the night of both Gent Wevelgem & Tour of Flanders sportives, a big portion of Flemish stew (Carbonades) with chips is food from cycling heaven. This beef dish is hearty, very tasty and the rich sauce makes an amazing dip for some crispy chips. Washed down with a beer, this is unbeatable. Of course, the classic chips and mayo need a mention. Friday night is chips night in Flanders and the Frituurs (chip shops) are packed. At the end of the sportives, you will often find a food van selling chips with a huge variety of sauces. After a long ride, these disappear in a flash.

We highly recommend staying in Oudenaarde for this weekend. The town is electric on the Sunday and the heart of the action for the sportive as well. If you do the medium or short route, you don’t need to touch your car over the whole weekend. You also have a few places to watch the race with a giant screen so you can both follow the race and enjoy the great atmosphere of the race. One option is to be by the finish in Oudenaarde, there is a huge fan park set up a short walk from the finish line and around 5 mins from the town centre. You can then see all the team cars and buses after the race and be in the company of thousands of locals cheering on their charges. If you want to get out on the course, the two most popular spots are the last two climbs – the Paterberg and our choice, the Oude Kwaremont. Here you get to see the womens race & the mens race three times as they go round the final circuit and catch the rest of the action on the big screen.

While the organisers of the Tour of Flanders have made some tough decisions to improve the watching enjoyment for the live audience by adding circuits over the main climbs, Roubaix is a point to point race with so much subtlety with seeing who goes with which breaks, team tactics, unlucky mechanicals, crashes and attacks that it makes for an unbeatable day of watching on TV at home or in a bar. Since 2017, the whole race is shown live and the excitement builds and builds. The last few years have been sensational races, who can forget Matt Hayman winning from the original breakaway in 2016.

Best Climb in a Pro Race

Gent Wevelgem rarely comes down to the climbs, but the Tour of Flanders has all been about the last two on the route. The less steep, but longer, Oude Kwaremont has been the launchpad for Cancellara and Sagan as they put in massive attacks and decimated the field. The peloton know it is coming so the last ascent always results in drama with thousands of fans cheering on. For anyone who can hold the wheels, the final challenge to get over is the Paterberg, short and very steep. Rarely do the underdogs make it over here with the favourites and typically the person over the top first here wins down the road at the finish in Oudenaarde. For all the flack the organisers took for changing the course, they have created one of the best last 30km in cycling and should be applauded for their bravery.

Best Cobbled Section in a Sportive

Best is probably not the right word here. There is a huge difference between the cobbles in Gent Wevelgem & Flanders compared to Roubaix. In the first two, these sections are part of the road system so are smoothed every day by cars. Not so in Roubaix, these farm tracks are opened to the world really just for Roubaix weekend and are so uneven and rough you will be feeling the vibrations through your arms for days. The best (worst) of the lot is Arenberg (pictured below), a life changing 2.5km stretch of the most uncomfortable terrain you are likely to ride. You have to hit this at speed and avoid all the other people trying to survive. Come here on the Sunday to watch the pros – remember this is pretty foreign terrain to them too, and you will get a greater appreciation of their bike handling skills.

A word of warning, and this goes for a lot of European sportives, the sports drinks and gels can be not to everyone’s taste. We remember filling our bidons up with some funky watermelon sports drink at Gent Wevelgem and struggling to get the taste out of our mouths for the rest of the weekend! Almost as bad as the French gels with the consistency of toothpaste. However, this is all forgotten when munching through the deliciously simple and tasty waffles at the feed stations. Sugar and carbs are not so popular these days, but on a tough ride these are amazing.

One of the special things about Gent Wevelgem is the route taking you past numerous WW1 battlefields and cemetaries. Over the centenary of these battles, fought by our ancestors who were mostly a lot younger than us, it can be a moving experience. Nowhere does this hit home more than in Ypres, a beautiful Flemish town that was on the frontline of so many battles and was almost completelty destroyed. The famous Menin Gate is a memorial to the missing from the Ypres Salient and every day since 1928 the locals have honoured the fallen by hosting the Last Post, a short ceremony where the roads are closed and a bugler plays. This is at 8pm and is a lovely way to finish your weekend.

With so much history in these pro races, there are some great places to visit. Check out the famous Roubaix velodrome where so much drama has happened over the years. On the Saturday, you have the chance to finish the sportive with a lap of the velodrome and the famous showers are sometimes open to the public. You can also come back here for free on the Sunday to watch the finish of the pro race and there is a small screen to see the rest of the race. In Flanders, there is a good museum (in Flemish) explaining the history of the race with some great old bikes and amazing footage of the race. Well worth an hour of your time over the weekend.

Ride the Cobbled Classics Sportives and watch the best pro races of the year: