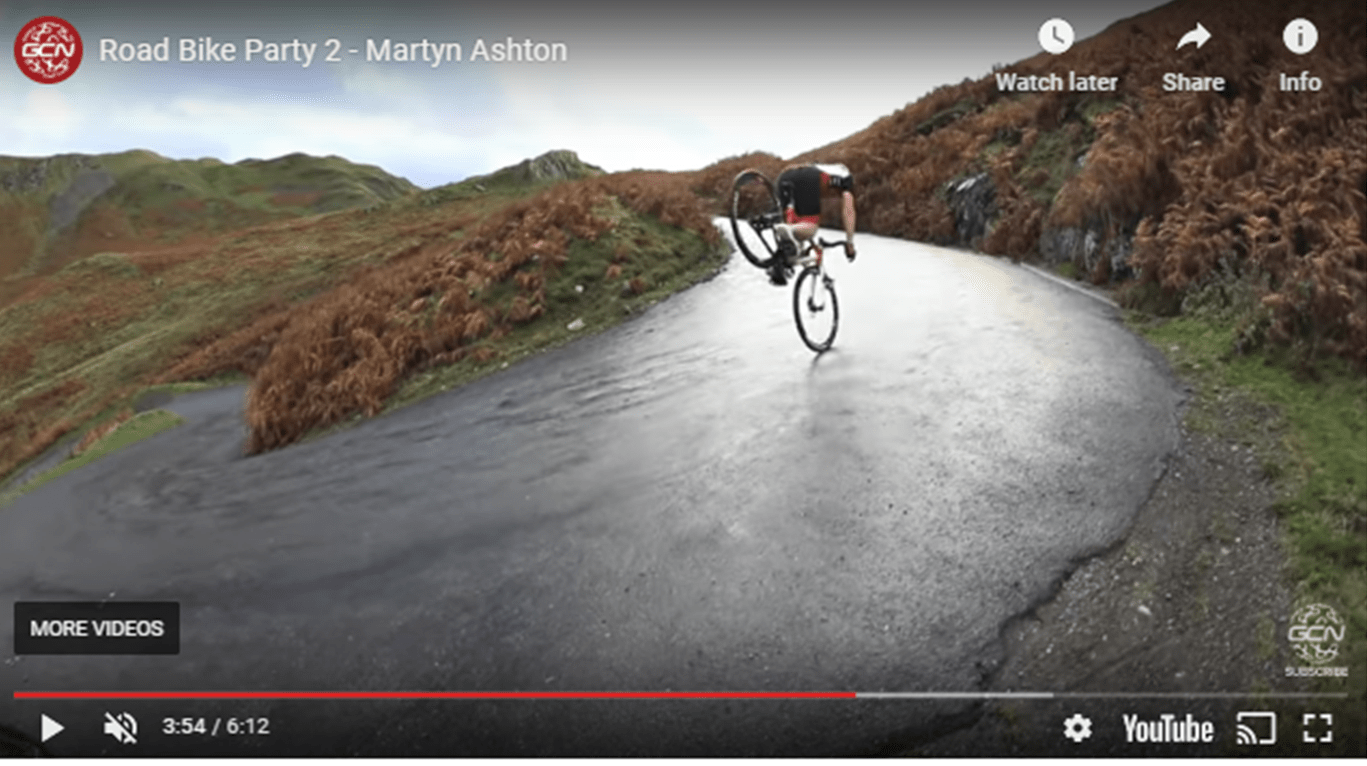 When life gives you lemons, take the time to brush up on classic bike races and crazy feats including descending the Stelvio no handed. Enjoy some of our favourite cycling videos ever on YouTube:

Giuliano Calore ought to be a famous cyclist, just because in 1974 he did this. Guests on our brilliant Bormio weekends will tell you that descending the north face of the Stelvio – over 9000ft above sea level and boasting no fewer than 48 hairpins – is hard enough on modern 30mm tyres and hydraulic disc brakes. Giuliano could tell us a thing or two about it.

There is not much faster than a road bike when descending in the mountains. You might get overtaken by a car if they are going for it, a motorbike for sure. But to be left for dust by a skateboarder, that is next level. Bonus point for naming the climb this is filmed on…

Daz Rides the Forest of Bowland

We are a bit biased because this is footage of one of our rides and we absolutely love the Forest of Bowland, but Daz is one of our favourite videographers on YouTube. Expertly filmed, a nice flow showing all the key bits of the ride and a real “For cyclists, by cyclists” feel. Join us soon for one of our social UK rides, stunning scenery guaranteed!

A long watch but well worth it if you have time. The 1986 Tour de France was seen by many to be the greatest ever Grand Tour. Three years later, Greg Lemond reprised his role as Roy of the Rovers – in between ’86 & ’89 he’d been shot for heaven’s sake – Laurent Fignon played Dr Strange and Pedro Delgado was the bloke who’d be late for his own funeral. There was drama before the thing even started, but from the time trial at the end of the first week to the incredible Champs Elysees showdown you’ve never seen Grand Tour racing like this. Unless you’ve already watched Slaying the Badger. Nothing else before or since has come close to these two.

Trials bike rider Martyn Ashton was tragically left paralysed by an accident in 2013, but by then he had created a phenomenon with his Road Bike Party tricks videos. This one was put together by his mates after his retirement, and the appearance of the legendary Danny MacAskill on a Colnago is sublime. What he does at 3.45 makes Die Another Day look like a documentary. It’s THAT ludicrous.

How the race was won has been the definitive analysis video over the last decade. All the One Day Classics & Grand Tours are covered with a great mix of dry humour and expert knowledge pinpointing the key points in the race and the decision making that led to glory or failure. Well worth checking out…

You may be aware of the Spring Classics fans’ “Pray for Rain” campaign in the build-up to recent editions of Paris – Roubaix. This will show you why. Watching Roubaix in the dry is like going to see Queen after Freddy Mercury died. You know: interesting, entertaining even, but ultimately pointless. This is arguably the greatest one day race ever ridden, with the skill, endurance and sheer panache of the main contenders almost transcendentally satisfying.

Guaranteed to drop the jaw of anybody who has ever been to a gym, you will now understand why Peto doesn’t need to stand on the pedals to attack. There are longer clips if you actually want to study the Champ’s core routine, but we’re just watching this to see what happens at 40 seconds, let’s be honest. It must be CGI, right?

And finally, one of the craziest last 5km to any classic ever. Three Etixx riders vs Ian Stannard (and not just any three, Boonen, Terpstra & Vandenbergh), surely an impossible task for Stannard…