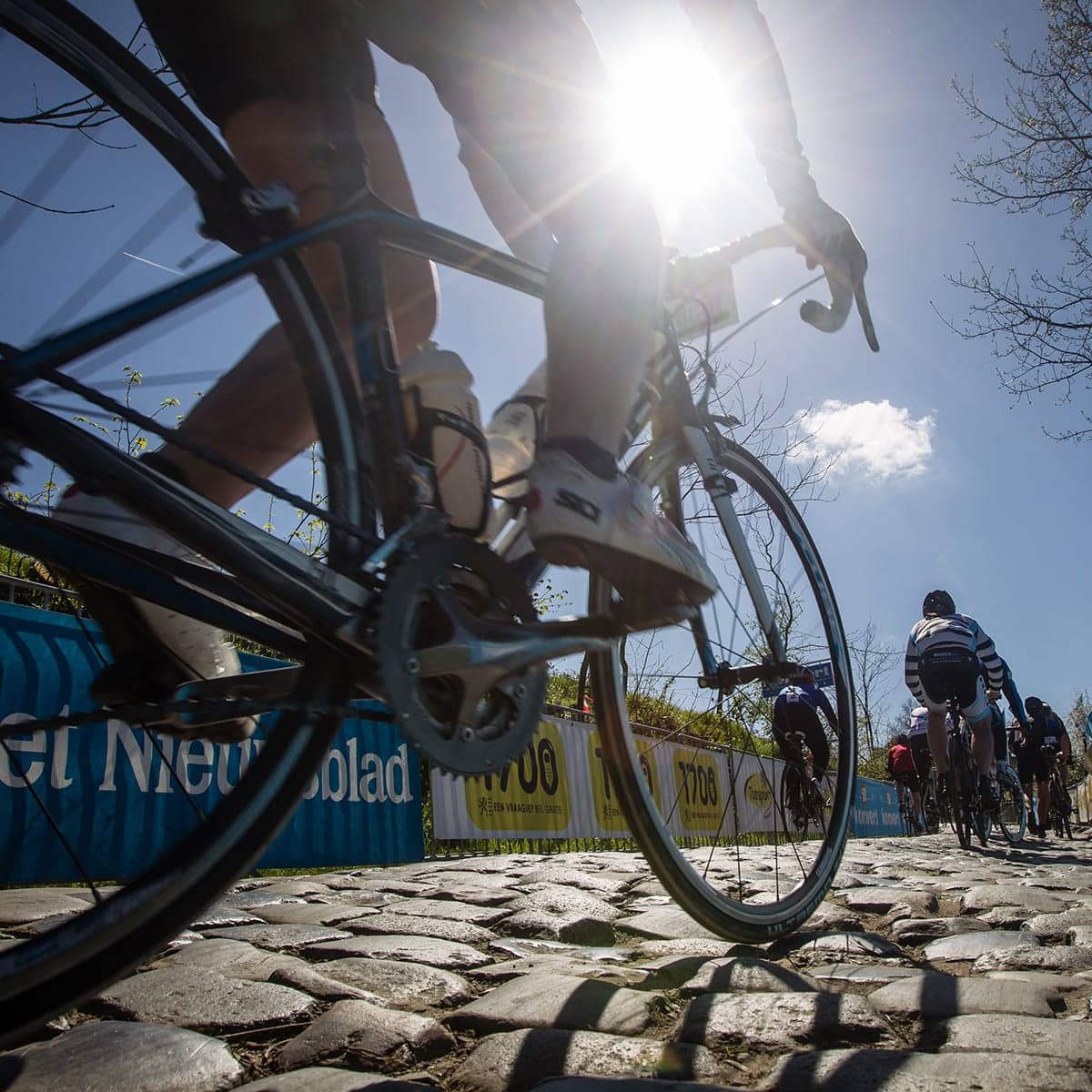 Below we look at some more realistic challenges for amateur riders to ride two classic events in back to back weekends. 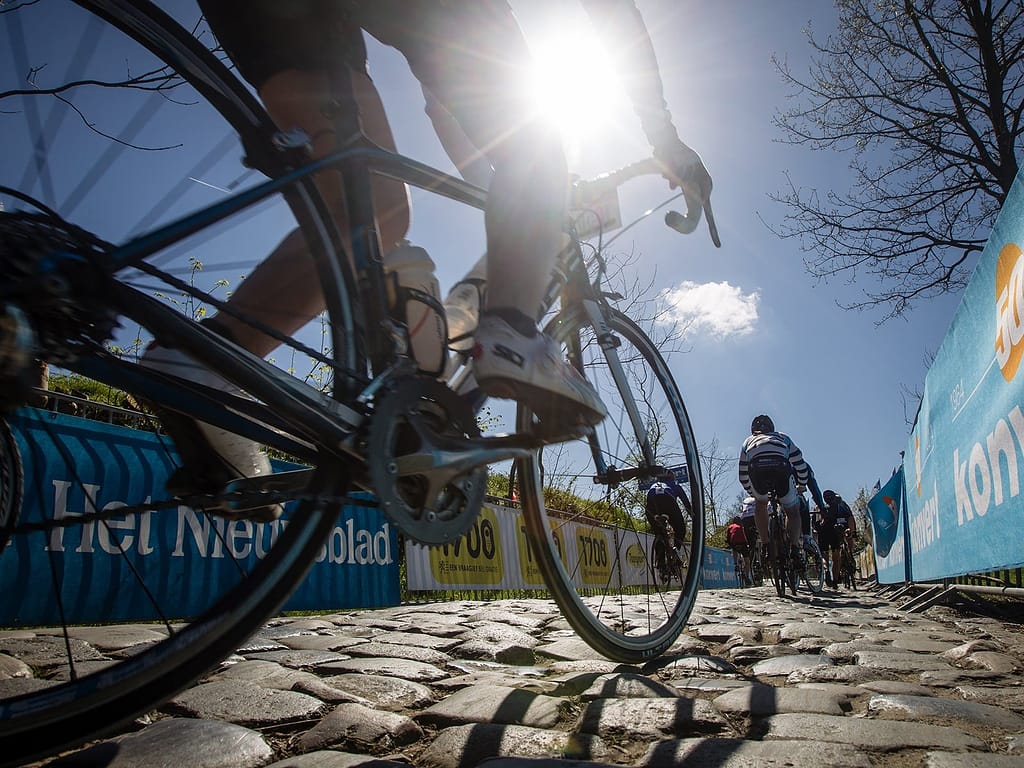 The Rides: The start of the pro season proper and the biggest week in the calendar in this part of Belgium. Start your week on the Saturday with the fantastic Gent Wevelgem Sportive. Choose between a range of routes, all heading out into the Western Flanders countryside. The big challenge is the winds which can be vicious – sticking in tight groups is critical as you snake through small farm lanes round tight corners which the local riders love to accelerate out of. In the middle of the route there are some short, sharp climbs culminating in the Kemmelberg. The cobbles here are gentle and the climbs are not a significant part of the challenge.

The following Saturday is the massive Tour of Flanders Sportive. This is one of the biggest sportives of the year and an absolute must ride for any keen cyclist. The crowds even for the sportive can be big with people cheering you up all the main climbs. The bergs come thick and fast, the highlight being the Koppenberg, Kwaremont and Paterberg. These all pack a punch with steep sections and rough cobbles. From the top of the final climb, save some energy for the final sprint into Oudenaarde and your own Flanders glory!

In Between the Rides: Stay in either Kortrijk, Gent or Oudenaarde for the week and ride all of the best routes in the area. Mix it up with a visit to the Sven Nys cyclocross centre and the velodrome in Ghent. Flanders week is packed with some top quality pro races including Dwars door Vlaanderen.

The Rides: The two biggest one day pro races in the world and two of the best sportives of the year. Kick off the week in Oudenaarde at the Tour of Flanders. After conquering the bergs of Flanders and feeling pretty good about your ability to harness the cobbles, its down to Northern France for a beating.

The Paris Roubaix Sportive is a rare chance to ride the infamous pave. These brutal farm tracks are not softened by vehicles throughout the year so are horrendously rough and uneven. Though the route is very flat, the cobbled sections come so frequently and take so much out of the legs that by the finish you will be as tired as a tough mountain sportive. The two toughest sections are the Forest of Arenberg (pictured above) and the Carrefour de l’Arbre closer to the finish. The ride ends in the legendary velodrome in Roubaix to end an unforgettable week.

In Between the Rides: Start off in Oudenaarde and watch the Flanders pro race out on the course on the Kwaremont. During the week, stay in Flanders and catch the Scheldeprijs pro race on Wednesday. Head down to Roubaix later in the week and get out on the cobbles to catch some pro teams practicing. Stay to watch the pro race on the Sunday.

The Rides: Start the week in Valkenburg at the Dutch classic. Amstel Gold is absolutely massive in Holland with the lottery for entries being massively over subscribed. While the rest of the country is pancake flat, this part is lumpy with some longer climbs and some very steep ramps. The pelotons can be big and the pace is quick, faster than the other spring sportives. The final climb of the sportive is the most famous and most fun – the Cauberg is where the pro race is often won and the crowds for the sportive are big and loud with a DJ pumping out the music. Sprint to the finish and then enjoy a very welcome beer in the race village.

The following Saturday is the final spring classic sportive. Liege Bastogne Liege is one of the toughest rides of the year with the full route being a punishing 255km with well over 4,000m of climbing. The ride takes you south of Liege into the Ardennes countryside over narrow country lanes and farm tracks. The weather can make or break this event and is often ridden in torrid conditions. There are several brutal climbs, the most famous being La Redoute with close to 20% sections. Tough at any time but after a leg sapping ride it can be a very hard final section to the sportive and your Ardennes week.

In Between the Rides: Stay in Maastricht or just over the border in Liege. Catch the Fleche Wallonne mid-week on Wednesday with the classic finish on the Mur de Huy. Take some time to visit the Sven Nys Cyclocross centre an hour from Liege and try your hand at something slightly different.

The Rides: Two of the best sportives of the year. Kick off in the heart of the Dolomites riding the mighty Maratona. This is one of the most beautiful rides anywhere in the world and kicks off in style with a helicopter firing the starting gun. The first four climbs form the Sella Ronda, a glorious 55km with breath-taking views and gentle gradients. After this, the route takes in longer and harder climbs with the main challenge being the Passo Giau. The final hurdle the get over is a Flanders style ramp close to the finish with a 15% gradient. A stunning ride!

The following week is possibly the date of the most famous sportive in the world – the Etape du Tour. We won’t know the date nor the route until late October.

In Between the Rides: This is part of the fun of trying this classic double. From Corvara, you can spend the week riding your way over to the Alps. We suggest one day in the Dolomites ending somewhere near Merano before a ride over the Stelvio to Bormio. A big ride the following day can get you to Lake Como which is definitely worth staying an extra day and exploring the amazing climbs before heading over to the French Alps.

RIDE THE MARATONA   |  RIDE THE ETAPE

The Rides: A season ending week in the Italian Lakes taking in the final classics & monument of the year. The start of the week is on Lake Varese for the Tre Valli Varesine. This is a huge race locally and the amateurs ride this hard. While the race at the front is competitive, towards the back it is a social, fun event taking in 3 lakes. From the start in Varese, you head north into the countryside and ride along the shores of Lake Como & Lake Maggiore before heading back to Lake Varese and a sprint finish.

Tre Valli Varesine is one of the first opportunities in 2022 to qualify for the 2023 Gran Fondo World Championships which will take place in Glasgow, Scotland in September 2023. Sportive Breaks are the official fan and amateur participant travel and experiences provider of the 2023 UCI Cycling World Championships in Glasgow and Scotland.

The following weekend is the last Monument of the year, the Granfondo Lombardia. This event made its debut on the sportive calendar in 2017 and had great feedback from the riders. The start & finish is in Cantu near Como with a stunning route taking in the Ghisallo & Sormano before hitting the final climbs near Como before a spring finish by the lake. For any spring classics lovers that haven’t ridden in the Italian Lakes, this event is an absolute must. Join us in 2022!

In Between the Rides: The week is packed with great cycling. On the Tuesday is the pro race of Tre Valli Varesine and then on the Thursday is Gran Piemonte. There is so much good riding in this area, we suggest staying around Lake Maggiore between Saturday and Wednesday and then head over to Como for a long weekend taking in the great rides on all sides of the lake.