Is This Trip For Me?

Sportive Breaks are your Official Tour Operator for the 2023 Giro d’Italia which takes place from Saturday May 6th until Sunday May 28th, 2023. We offer unforgettable VIP Hospitality experiences and Giro d’Italia cycling and spectator tours with hotels, transport, daily support and VIP experiences all included.

Join us for the final weekend in this beautiful historic city to watch the conclusion on the 2023 Giro d’Italia. We have selected two hotels for you to choose from, both offering a luxury stay in the best location to watch the race. make your weekend extra special with a choice of VIP Hospitality experiences in Rome to watch the final stage on the roads of Rome in style.

Come to the capital of Italy to watch the last stage of the 2023 Giro d’Italia. This year’s final stage sees the riders take on a city circuit in Rome. The route takes in some of the famous sights including the ‘Homeland Altar’, the Senate Palace, Circus Maximus and the baths of Caracalla before the finish at the Imperial Fora, near the Colosseum. 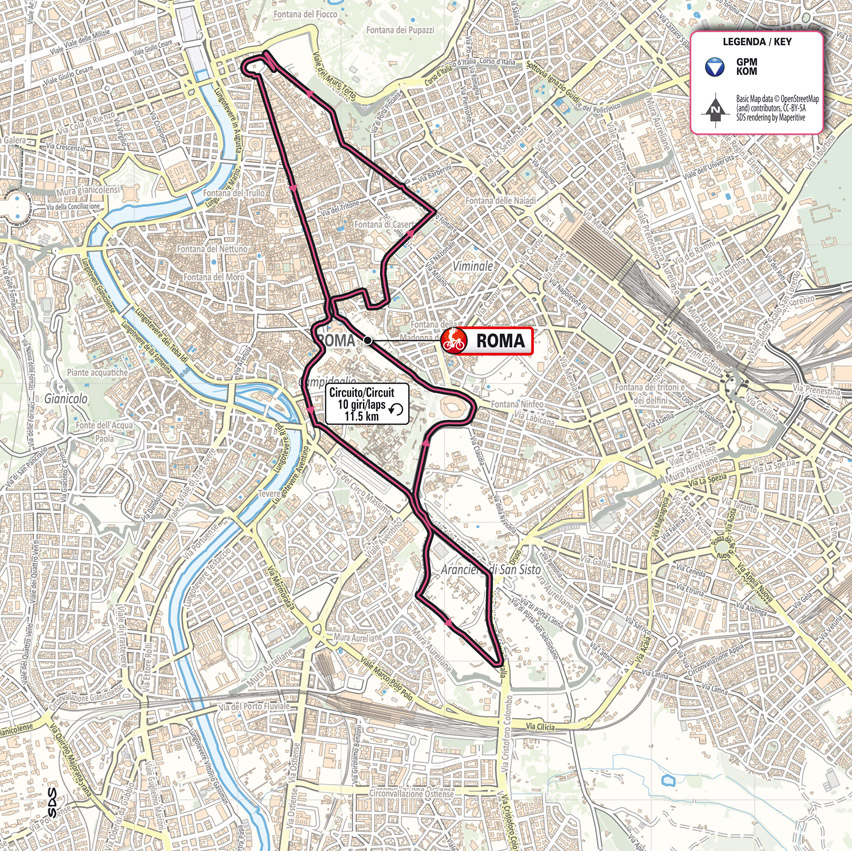 We also offering you VIP Hospitality options to enhance your trip to an unforgettable weekend in Rome.

The Giro d’Italia offers several restricted-access enclosed hospitality areas, along the final straight, from where you can enjoy the end of the race from a front row seat. The finish line marks the end of the competitive efforts of the day. All around, the essence of the Giro d’Italia: fun, joy, entertainment. A hearty mix of celebration and passion.

After collecting your pass, you will have access to your selected Hospitality Area. Enjoy a superb vantage point along the final straight with non-stop finger food/ open bar service. Plasma TV screens will broadcast the race until the riders come into view live.

In Rome you have the choice of 3 hospitality areas

The 106th Giro d’Italia hits the Italian capital for the grand finale. The stage will be a closing showcase featuring an 11.5-km circuit of the centre of Rome, to be repeated 10 times. The route will touch a number of historical landmarks such as the ‘Homeland Altar’, the Senate Palace, the Circus Maximus and the Baths of Caracalla, before the finish at the Imperial Fora, near the Colosseum.

Arrival in Rome. Your chance to settle into your hotel and explore the city.

Leonardo da Vinci Airport is also called Fiumicino and it is a major hub for intercontinental and European flights. Fiumicino is located at 32km from the city, near the sea.

The easiest way to get into Rome is by taking the Leonardo Express. This is a direct train service to Rome’s main railway station, Stazione Termini. Tickets cost €11 and are one-way only so you must buy two tickets if you want a return. Tickets must be stamped in the machines on the platform before you board the train. There are signs in the arrival terminal of the airport. The service runs every 30 minutes, between 6.30am and 11.30pm.

Only every use an official white taxi recognisable by the ‘taxi’ lights on top, and the taxi license number. From the airport into central Rome the set fare is 48 euros. Call 060606 to report any problems.

Ciampino is a former military airport that has recently been developing into a hub for budget airlines. Airport facilities are quite basic compared to Leonardo da Vinci. There are several ways to get from Ciampino into Rome including a couple of direct coach services.

Enjoy a tasty breakfast at your hotel before spending the day watching the race on the final day. You will then see the winner of the 106th Maglia Rosa lift the trophy!

The stage is raced over 10 laps in Rome city centre so you will see lots of action today. Why not make it extra special and buy one of our Giro d’Italia VIP Hospitality experiences.

After a fabulous weekend, you will depart Rome.

Experience luxury at The Grand Hotel Palace in the heart of Rome city centre on the Via Veneto with dazzling rooftop views, elegant interiors and an abundance of historic charm. Designed by legendary architect Marcello Piacentini in 1927, this boutique hideaway was beautifully restored by award-winning architect, Italo Rota in 2010 to blend timeless Italian design with 21st century modernity. Marble floors, grand Murano crystal chandeliers and stunning frescoes by Venetian artist Guido Cadorin embody the true essence of La Dolce Vita. Our 74 bedrooms and 14 luxurious suites are adorned with refined designer furnishings offering breathtaking views of Rome's Via Veneto. Make the most of your stay in Rome and relax after a day of exploring this ancient city in the Spa. Rejuvenate and recharge in this Asian inspired oasis complete with a sauna, indoor heated salt water pool, relaxation areas and a full range of indulgent treatments.

In the heart of historic Rome and shopping, within walking distance from Piazza di Spagna and Via dei Condotti, Hotel Mozart has one of its strong points in an enviable position. It’s warm and elegant atmosphere, the comfort of its rooms, the cosy lounge, make it the ideal place to stay in Rome. The wonderful Roof Garden, the balconies and the terraces of some rooms, offer a splendid view over Rome and in particular on Trinità dei Monti, Villa dei Medici and the Church of San Carlo al Corso. The quantity and quality of services offered to guests is truly remarkable. Our bars offer a small catering menu with typical regional dishes, pizzas, desserts and a selection of excellent local wines. Snacks, beers, aperitifs and international cocktails, fine liqueurs, are served in the lounge with the fireplace lit during the winter and in the enchanting Roof Garden with panoramic views during the Summer. The Hotel Mozart has 56 rooms furnished in an elegant classical style. A constant maintenance and the high comfort, makes them efficient in all respects. The furnishing and equipment of the rooms is the same throughout the building. The rooms vary in type depending on the size and on some particularities that elevate the standard. The rich breakfast offers desserts, artisanal flans and exquisite traditional regional specialties. The service takes place in elegant, finely decorated rooms, with a balcony and overlooking the characteristic promenade of Via del Corso, one of the most important streets of the capital.